At Her Command by Meg Silver 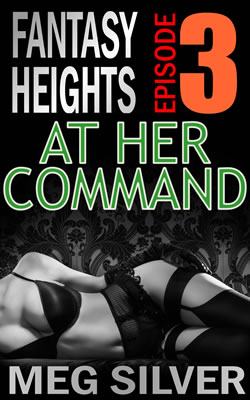 Episode 3: Coworkers, secrets and a mystery client intrigue Amanda while she learns to give and take commands at Fantasy Heights.

“At Her Command” Info

“At Her Command” Purchase Launchpad

“At Her Command” Excerpt

Amanda perched upon her throne, head held high and regal. Her breasts bulged above a stiff gold brocade corset. Ankle lace-up boots in matching fabric graced her feet, and her hair had been piled high and strung with glittering beads.

Before her on the steps awaited Neil, her client. His hands were trapped in manacles behind his back. Neil had returned to Fantasy Heights to experience forced seduction and Amanda was determined to make it memorable. His powerful build was contained for now in a fine uniform, but that would not last. She wanted to see his body again. The thirty-something neurosurgeon had a beautifully defined physique to match his beautifully talented tongue.

“Do you yet refuse to yield, captain?”

Neil kept his eyes down. “It shames me to defy your wishes, Highness, but you know I cannot yield. The laws of my people forbid it.”

She made a show of sighing deeply, pleased that the client was so immersed in his fantasy. He would be well rewarded.

“Guards.” She motioned to the two young women clad in chainmail tunics and very little else. They stepped up beside their prisoner.

“Remove his shirt and bind him to the rack.”

Their observer and a male servant wheeled the portable rack before the throne. They lowered the frame so it made a loud, solid thunk against the floor. The rack was a specially built construct with restraints in various places. It tilted and adjusted a captive to many interesting, useful angles and positions.

Excited by the promise of what was to come, Amanda felt her heart thud anxiously in her chest as the guards freed Neil’s hands and stripped off his waistcoat and shirt. They left the pants for now. No one but the queen was allowed near his cock. She would pay it great attentions when the time came.

Her pussy throbbed with impatience. She stood while the guards forced Neil to face the rack. They manacled his wrists to the frame. With a hard yank, they tilted the frame twenty degrees, lifting the captain off his feet. They would not secure his legs. Not yet. He would have plenty of fight left in him, and she would need to strip him the rest of the way before rendering him completely helpless.

A rush of diabolical joy puckered her nipples into tight, sensitive knots. Before coming to this resort, she would have been too shy and inhibited to dare control a man in this way. She had since come to know herself better, and how much she enjoyed sexual dominance. Not as much as her clients enjoyed being dominated, absolved of societal guilt for anything she might demand of them, but she loved to watch her clients achieve new realms of pleasure while they trusted her to wield her pretend power over them.

She rose and stalked slowly down the steps. Hearing her, the client tugged at the restraints as if he might yet escape before he was forced to yield to her sexual demands.

She circled him first, her heels clicking on the parquet floor. He was quite tall. Much taller than she was, and much more physically powerful. She watched the play of muscle beneath Neil’s skin when she lightly traced the end of her crop between his shoulder blades. He flinched, the muscles contracting involuntarily. She drew a line with the crop’s leather flap down his spine, between the twin ridges of thick muscle leading to his buttocks. She could hardly wait to spend a great deal of time and attention between them. They’d had their fun last time they’d been together, but not nearly as much as they both desired.

She skipped the playful smacks and brought the crop down hard on his left buttock. He answered with a hissing growl of pained pleasure.

The right buttock took her sharp abuse this time, and his entire body stiffened against the sting.

“Will you not yield?” she asked.

A slow, wicked smile pulled at her lips. So proud, this one. So much fun. He continued to growl out defiance until his back was flushed red from the gentle—and some not-so-gentle—strokes of her crop.

Deciding it was time to up the stakes, she closed on him. His boots had already been removed. His breeches would come next, and she spared him no modesty as she forced her hands between him and the rack to unlace his fly. Getting his erection free of the fabric took some effort. The man was rock hard, swollen purple with need.

“Part of you yields,” she observed. She stripped his pants away and flung them carelessly to the floor.

She flipped two latches on the rack that freed the panel at cock and buttock level. Now he was vulnerable to her from both sides, no matter what direction or angle she put him. When she nodded to her guards, they tethered him at the knees and ankles.

She crossed to the front of the frame where his erection poked out, long and proud. Bending at the waist, she lifted the peplum covering her buttocks. She backed up to brush against Neil’s cock, back and forth.

“Would you not break your laws to have me, captain?”

This time he was slower to respond. “No.”

“You weaken. Perhaps we can speed you along.”

She applied the crop to his bare left buttock this time, hard and sharp. She followed it with a stinging slap from her palm and she watched as the blood rose, turning his skin red. Switching sides, she punished his other buttock until they were both equally stained red.

She gave him no chance to yield before the next step. Today, she meant to take their exploration miles farther than last time. He’d asked for this specifically when he’d booked this fantasy. It was the first time she would attempt anything like it, and while she did so, she knew her trainer, Thomas, would be watching from the wings, just in case. The knowledge that he would be there, observing, both unnerved and excited her. She hoped he was in position, because her curiosity and eagerness to get started was beginning to override her control.

She picked up a bottle of lube, greasing her hands and dripping clear liquid between his buttocks. He groaned in anticipation of these first delicate steps. She took great delight in prolonging his anticipation, exacerbating it by tilting the rack farther forward and splitting the bottom panels slightly to force his knees apart.

Her client sighed out a curse, and she couldn’t help a full-fledged smile. She trailed a fingertip from the small of his back between his buttocks. She came to a stop when she touched his anus. The tightly puckered hole flexed in response. He wanted this. Badly, and she gave it to him, slipping her finger inside his sphincter. He tightened against the intrusion. She let him breathe through it for a moment or two before slowly beginning to rotate her finger, pumping only to very shallow depths. There would be plenty of time for rough play later. For now, she wanted to tease and caress, trade an easy affection first so that any pain involved was not careless or accidental. He would have to be eased into penetration, stretched and relaxed before they could move on.

She felt him pushing against her now and deepened the play, pumping and twisting with more force.

With her free hand, she smacked his ass. He had fallen out of character. If they were to see his fantasy through to the end, he couldn’t break immersion. Not yet.

He muttered a sorry and she smacked him again, and at the same time, drove her finger in as far as it would go. He cried out in ecstatic surprise, panting now. She knew the sensations would be building inside, forming into a sensual pressure that could quickly overwhelm if he let it.

She withdrew her finger and gave him time to recover. Meanwhile, she picked up the crop again and placed two blows at the juncture of thigh and buttock, reddening the skin once more.

When his breathing shallowed out again, she refreshed the lube on her fingers and this time inserted two inside of him. The twisting and pumping was harder now, his body more resistant, but he writhed and moaned, helpless but inviting more. And he stayed relaxed, telling her it was time to introduce the next step.

She pressed the tip against him. “Do you yield, my captain?”

She suppressed a smile and began to push, gently, slowly, until the tip of the plug disappeared inside the tight rim of flesh. He could do nothing to stop her, restrained as he was, and she took some time in rotating the plug, teasing him, twisting and pumping again before drawing things closer to the next step. She applied direct pressure, and felt him relax against the plug. Finally it slipped all the way in, the rim of plastic inside his sphincter and the broad base right up against buttocks. The tail hung down, and she took some time just to look, enjoying a moment of high-octane arousal.

While his body adjusted to the plug, she had time to give him a show. She beckoned one of the guards forward. The young woman knew just what to do, releasing the corset so that Amanda would be nude save for the boots. Then a ravenous mouth went after her exposed nipples. The second guard stepped up behind her, reaching directly for Amanda’s cunt, sinking into the wetness there and stimulating her almost more than she could stand.

She watched Neil’s penis bob with delicious tension and she knew their time was drawing short. Still, she prolonged the show a bit longer, shaking off her guards and taking the lube to the strap-on penis, stroking the clear gel onto the shaft and stroking it long and hard.

Her captive groaned and shuddered, and she knew it was time. Her own nerves were jittery now. She had never done this before and she was secretly quite afraid that she might hurt him. Thomas had coached her, advising that she go slowly and just as with the plug, take her cues from Neil. She would take him a bit at a time, judging when to proceed by how quickly and willingly he relaxed against the intrusion. If nothing else, there was always their chosen safe word, ‘emerald,’ that obligated her to stop immediately.

The guards helped to manipulate the frame. They shifted supports around, parting Neil’s legs and tilting him at a sharper angle. Amanda was able to stand between his legs and comfortably position herself. When she removed the plug, he growled again. She placed the plug on a receiving table and pressed the tip of the strap-on against him.

Just to be sure, she asked him one last time. “Do you yield?”

Even more defiant, though his voice shook with excitement, he gave her the go-ahead. “I will not yield to you, Highness. You take me by force.”

He exhaled a moaning breath and she bent at the waist, nipping gently at his back. She saw him smile in response, taking her reassurance that he was enjoying this every bit as much as she’d hoped he would.

Back to the Fantasy Heights Page