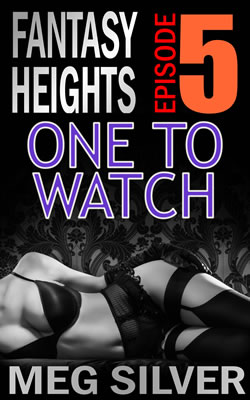 Episode 5: Tensions are building, and not just on set. More and more secrets reach critical mass while Amanda emerges as a rising star at Fantasy Heights.

“One To Watch” Info

“One To Watch” Purchase Launchpad

“One To Watch” Excerpt

A vengeful crime lord put a bounty on ten codes. He captured the code writer and handed him over to us. We have three days to interrogate the writer and extract his codes. If we can’t deliver, we become liabilities who know too much. Say anything, do anything it takes. We need those codes. Our lives depend on it.

Amanda tucked the scene pages back into her carryall. “I can do this. I can play a bad guy’s henchman.”

She blew out a breath and rolled her shoulders, trying to focus on what mattered. The client mattered. The fantasy mattered. Much better she obsess about her performance than fall prey to the fears and suspicions awaiting her outside this set.

Discipline, she reminded herself. She focused on the list Derek had taped by the door. The top said ten pieces of code. Beneath were blank lines numbered one to ten.

Already she could see Derek’s prediction was coming true. He’d said the client would give up a few pieces right away and make them work harder and harder for the rest. Halfway into their first day, Derek had filled in the top two blanks with North and down-down.

So far, so good. Pity she was only scheduled on the first and third days of this fantasy for brief, specific scenes. She liked working with Derek. Disruptive chemistry aside, she learned a lot from his specialty scripts.

Besides. It felt good to channel the tough, edgy henchman energy onto a harmless client. Others, like Thomas or Josh or Fiona Cornell, might not escape unharmed. They would be lucky to leave the set without bamboo shoved under their nails.

A yellow LED light blinked above the set door. Almost time to go on. She turned to check herself in the mirror. Her hair sat in a bun cinched tight atop her head. The wardrobe was pure tart: black pushup bra and burgundy shirt showing maximum cleavage, black pencil-slim skirt hiding black thigh-high silk hosiery and garters.

To her mind, she didn’t look terribly threatening, but every detail matched the client’s vision. He wanted a dark temptress to call upon desires he wouldn’t dare indulge in everyday life. If all went well, he would likely never forget the next twenty minutes.

The green cue-light above the door began to blink. Time to go on.

She wrapped her hand around the doorknob, then closed her eyes. Codes. Desperate. Stop at nothing.

He sat in a plain wooden chair, wrists bound behind his back, ankles bound to the chair legs. He wore a black tank top and nothing else. His penis, half erect, began to stiffen slowly as his eyes sought and clung to Amanda’s breasts while she neared the circle of light.

Behind him in another chair sat Derek. He leaned forward, unseen by the client, to speak quietly, calmly, right next to Brent’s ear. “She can give you what you want.”

The client’s jaw set stubbornly, and his gaze travelled to the black stilettos on Amanda’s feet.

She clasped her hands behind her back and watched Derek. Unlike their client, he looked fresh as the proverbial daisy, brown hair at its unruly best, his unconventionally handsome features alert and mischievous. He continued to murmur in the client’s ear, too softly for her to make out what he said. His eyes swept up to meet hers a couple times but there was nothing in them for her. Not a greeting, not warmth, nothing. He was completely focused on the client.

Left to wait, she fixed a guarded expression on her features and allowed her attention to wander only as far as the two-way mirror. She’d heard rumors that many of Derek’s fantasies doubled as features for voyeur clients. Right now, the room beyond the glass could be full of people. Or it could be empty, save for their observer. No way of knowing for certain.

Derek reclaimed her attention by reaching one long arm around Brent to grasp the shaft of his penis. Brent inhaled sharply and struggled against his bindings, yet he looked down between his legs to watch, captivated, as Derek’s enormous hand began to work the rim of his circumcised penis.

Amanda watched too, her interest piqued by Derek’s demeanor. The way he touched Brent wasn’t meant to stimulate or give pleasure. This was something different, far more calculated and controlled. Or maybe ‘controlling’ was the better word, she thought, as Derek continued to knead the tip of Brent’s cock, murmuring into his ear.

“How many letters in the next code, Brent?”

Derek nodded and went back to murmuring. After a while, she caught a snippet. Derek must have raised his voice deliberately. “And when she comes, her pussy pulls so sweet and hot and tight, I’d sell my soul to stay inside her forever.”

This time, she caught a glint of humor as Derek glanced up. Careful to keep a look off her face, she wished he wouldn’t talk that way. Her mind could stray too easily to the last time they were together on set, to lying tangled with him, and the way his torso tightened into rock when he strained to fuck her as deeply as possible.

Derek let go of Brent’s shaft. He sat back and set the stage for her part of the fantasy. “Do you want her, Brent?”

“All right, then. You know what you have to do. You give her something, she’ll give you something in return. Deal?”

When Brent did not respond right away, Amanda gave incentive. She adjusted her stance to stand with her feet shoulder-width apart, pulling the skirt taut across her thighs. Placing her hands there, she began to slide the fabric up, revealing more and more of the garters.

She kept going, feeling a deep, sensual charge at their blatant interest. When the hem began to reveal the Y between her legs, the men were so still and breathless with anticipation she almost laughed.

Maybe the proper thing to do was stop before she revealed anything vital, but she was not playing the good girl next door. She was playing a crime lord’s henchman. For her, sex had to be treated as a tool for extracting what she needed. And the enemy needed proof she could deliver a sexual dream in exchange for a code.

After a good long look at her bare mound, Brent capitulated. “Deal. Take everything off but the garters and heels, and I’ll give you the first letter.”

For a split second, she caught a frown on Derek’s face. Irritation, maybe? Impatience? Whatever it was, it came and went in a blink, and he did not linger on it. He was up and out of the interrogation room a moment later to watch through the glass while Brent gave up the letters, one by one.

As soon as the door closed behind him, Amanda went to work. She brought her feet back together and let the skirt fall, hiding the prize. “I’m not crazy about those terms. Giving you anything on credit doesn’t sound like a great idea. So how about you give me the letter first, and then I’ll strip.”

She was disappointed when he didn’t put up much of a fight. He immediately said T was the first letter.

She took her time with the reward, reaching behind her back to slowly unzip the skirt. From the moment she stepped out of it, Brent’s eyes never strayed from her pubis, not even while she unbuttoned the shirt and flung it onto the table with the skirt. Only once the bra came off did he allow his gaze to travel higher.

Clad only in the garters, silk hosiery and stilettos, she approached. “What do you want for the next letter?”

“I want you to touch my cock. Suck the tip.”

Instead of asking outright for the letter, she approached him, and got down on her knees. Not touching him yet, she looked up and raised her brows.

Sounding flustered, impatient, Brent told her the next letter was E.

Good as her word, she slipped one hand between his legs to trace her index finger lightly over his balls. With her other hand, she grasped his shaft, firm and commanding the way Derek did it, and lowered her head.

Brent made an odd sort of sound, part laugh, part groan, part growl when she stuck out just the tip of her tongue and flicked at him. His whole body jerked with the contact, and seemed to expand. Air swelled his chest, every muscle in his legs seized, and his back arched as if he could strain forward and thrust into her mouth.

She drew back. Ordinarily she might allow the client to steer through a scene like this, but she was supposed to maintain some semblance of control, wasn’t she?

Brent relaxed back into the chair once more. She began anew with her mouth, licking, kissing, teasing his tip. He let his head fall back and for this small surrender, she cupped his balls more firmly, stroking and massaging.

This won another long moan. She kept up the massage but lifted her head. “What’s the next letter, Brent?”

“No. I want something else for the next letter.”

“I want you to untie my feet. And then for the fourth letter, you go stand by that table and bend over.”

No one had said anything about untying the client. Probably nothing wrong with it, and she understood where he was headed. He wanted to fuck her for the fifth and final letter.

He gave her X and A. The code was more than likely TEXAS, so she already had what she’d come for, but they had a deal. She had to hold up her end of the bargain.

She transferred her attention to the ankle restraints, freeing one leg and then the other. A few steps later she bent over the gunmetal-gray table, tilting her pelvis down, spreading, inviting him to take what he wanted in exchange for the final letter of the code.

Brent had trouble balancing as he tried to rise from the chair with his hands still bound. He finally managed, and was on his way to her when the door opened behind him.

Derek. He looked and sounded irate. “You take one more step toward her, you’re finished.”

Amanda didn’t understand. Why had he interrupted? They’d had a deal. “What’s wrong?”

“He’s lying, is what’s wrong. He’s giving us fake code. Get your ass back in that chair, Brent.”

Derek grabbed him by the elbows and hauled him back to the chair. Even though Amanda knew he was only playacting, she still jumped when Derek levered the chair over backward. He dropped Brett right along with it until their client lay stunned, staring at the ceiling, unharmed but definitely manhandled while Derek replaced the restraints.

To her, he said, “Stay where you are. Stay exactly like that.”

She did as he asked, too surprised at the turn this fantasy had taken to do much else while Derek hefted the chair and Brett upright once more. He wrenched them a few degrees clockwise to face the table.

“Here’s what happens when you lie,” Derek said. “I take the reward for myself.”

Back to the Fantasy Heights Page