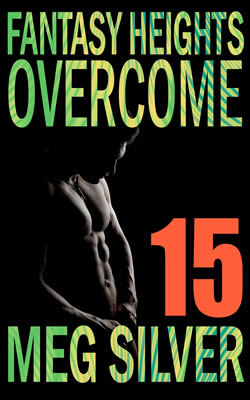 Episode 15: In high demand as a performer and stalking expert, Sophie navigates a busy, pleasure-packed week at Fantasy Heights. Unexpected visitors shake things up between Sophie and Ben. Thomas, meanwhile, turns his creative problem-solving skills onto a personal problem.

So this was the infamous shadowbox.

Sophie looked around herself at the monochrome space. Black walls, black carpet and heavy black velvet drapes provided an invisible canvas. The only color in the room came from the furniture gathered at center stage. A long white dining table with gilt edges and three matching chairs gleamed ultra-bright against the dark background.

The set was bigger than she’d expected. Also better kept. Vacuum marks grooved the carpet, and the whole place smelled like eucalyptus. Loud but muffled music and the occasional flash of light leaked around the edges of the drapes.

Outside that glass, in The Zoo, an event was in full swing. Tonight would mark the second night the club would operate without its star performer. Rylie Vaughn had been relieved of duty now that her Accord boss was a fugitive. Mercury Milazzo was wanted for the murders of Andrew West and Dylan Moore.

Hard to believe things could turn out this way.

Megan, the performer who would partner her on set, emerged from behind the blind. The leggy redhead lugged a freestanding candelabrum onto the set. The scrolling ironwork bristled with at least a dozen red tapers. She asked, “What did I do with that lighter?”

“I’ve got it.” Sophie took a long-necked lighter from her robe pocket and handed it off.

Sophie grimaced in sympathy. Rylie wasn’t the only one upended by Mercury’s surprise takeover of Andrew West’s organization. Scott, Mercury’s son, was devastated. Not only was his father a fugitive, but Scott had been asked to take over his father’s Accord seat until the syndicate could produce a suitable replacement.

Traumatic though the fallout might be, Sophie had to admit to some relief. Shelley had a digitized copy of Janos. Who better to combat her than Scott? He was their only hope of stopping whatever Shelley planned to do with that data.

Sophie asked, “How’s he holding up?”

“Better than I thought he would. I feel just awful for him and Rylie both. I loved working with her. She made every performance feel like the Super-Bowl halftime show. I wonder who will replace her.”

The arrival of their observer—a borrowed Fantasy Heights security guard—called their attention away from any speculation.

Right after his arrival came Ben. He emerged from behind the blind, looking enormous in a charcoal suit. His hair was its usual leonine mess of sun-streaked waves. Those piercing blue eyes told stories of sharp focus on business.

He spoke in an authoritative voice. “You’re on this set for twenty-five minutes. Not a second longer. We’re due back at Prescott House right away.”

She nodded. They had an important meeting awaiting them, and right now, her Fantasy Heights schedule interfered with Accord and protective detail business.

Before she could do more than say “Yes, sir,” Ben had gone.

Sophie raised her hands in a ‘right?!’ gesture. “So I’m not the only one who thinks he’s extra crispy today.”

“Definitely not the original recipe. What’s going on?”

“I’m not sure.” Sophie couldn’t even guess, but she could pinpoint the moment things changed. Late last night, Ben had taken a lengthy phone call. Afterward, he’d seemed distracted and shuttered. The effect amplified itself after they went to bed. Ben had woken her twice with his tossing and turning.

Sophie wagged her hands and rounded her shoulders, trying to release pent-up energy. She couldn’t wait to get this performance started and burn off some more.

“I feel guilty, sometimes. I’m a performer, you know? I’m supposed to please my clients, but it’s more like I’m escaping onto set to forget my own troubles.”

“Why would you feel guilty? That’s the whole point of this place, isn’t it? Believe me, no one minds.”

Sophie supposed so, and she did look forward to this performance. The two of them did a quick rehash of the script’s finer points. The fantasy would serve dual purposes. They would provide atmosphere for The Zoo club-goers while entertaining a client inside the shadowbox. He would stand by while Sophie and Megan—groomed to be as identical as possible with long sleek ponytails, winged liner and exaggerated lashes—would put on a show until the client joined in.

“Come on, third wheel,” Megan said. “The client should be here any second.”

The pair of them shed their robes, hanging them neatly on hooks behind the blind. Both of them nude now, they paused while Megan hit the button to raise the enclosure’s drapes. By the time they returned to center stage, the drapes were raised. Now the club-goers could see them taking their places at opposite ends of the ornate table. Soft lighting would show off their forms, and the golden light cast by the candelabrum’s many candles added extra glowy warmth.

Sophie quelled a little, knowing what was coming, but knew she would enjoy trying something new. She had worked here long enough to trust that she would.

While waiting for their client, she stole the opportunity to peer through the shadowbox’s glass enclosure into the crowd beyond. The brighter lighting inside the shadowbox made it difficult to see out into the club. Add the strobing lights, and club-goers had to stand quite near the glass for her to see them clearly. She spied one nude couple, a man pushing a woman forward, pressing her bare breasts against the glass as he fucked her from behind.

Sophie felt a rush of arousal, wondering what it must be like out there, to be so uninhibited that you could fuck someone in the midst of a crowd. She wasn’t sure she could pull that off.

Ben, though, had once been the lead performer in exhibition fantasies. He had specialized in public displays of possession like this.

An image of him taking her that way superimposed itself over the couple outside the glass, and her body went wild. Heat infused her blood as she watched the man out there bring one hand around to pinch at the woman’s nipples before dipping between her legs to rub frantically.

Ben would exhibit more control. He would not rush that way. He would take the time to let her body quicken in stages. He liked to draw her up to the highest possible peak before sending her over the edge.

The sound of Megan clearing her throat brought Sophie back to their side of the glass. Their lone male client had joined them on set. He wore an elegant evening suit and a mask obscuring most of his face. She could see enough to know he was on the young side, perhaps thirty. Not overly tall but in excellent shape with ashy blond hair and darkish eyes. Through the mask she couldn’t tell an exact color.

Sophie knew nothing about him, other than his first name: Jay. He and Megan would have a longer stretch together on this set after Sophie had gone. Due to her scheduling conflict, Sophie would need to cut out early, hit the shower and race back into business attire.

Jay made a small motion with his hand as he took up position against the blind so that he could see under the table. This was her cue to slip off her chair and under the table where she crawled forward to reach Megan. She placed her hands on Megan’s knees, rubbing playfully before pushing them apart. She ran her hands up the insides of Megan’s thighs and back again a few times, drawing stimulation and blood flow downward until Megan scooched forward, spreading her knees farther apart.

Sophie liked that about Megan. She did truly enjoy herself on set, and made an unabashed show of her pleasure. A determination woke in Sophie to make that very easy for Megan. Any pretense of shyness or restraint went out the window as she traced her right palm against the silky skin of Megan’s thigh. She turned her palm up and traced her index finger along Megan’s slit. This was not a tickling touch. She showed aggression, wiggling her finger until she found the soft, moist opening of Megan’s vagina.

Pushing her way in, she heard Megan let out a long, happy moan. Mindful of the script and their audience, Sophie crawled forward to bring her face between Megan’s legs. She opened her mouth and extended her tongue, flicking the end along labia, and between folds.

Megan had used a gel lube before the show that tasted faintly of green apple. Over time, that taste faded as Megan grew more and more wet, and her natural juices began to seep. Sophie replaced her fingers with her tongue to get a better taste.

Expecting the musky, warm flavor, she tasted green apple once more. Megan must have banged herself with the gel on her fingers. The visual of Megan playing with the gel made Sophie’s already swelling pussy begin to heat anew.

She wasn’t allowed to simmer long on that thought. Megan reached down to take hold of Sophie’s ponytail, giving her a tug to signal it was time to continue onto the next step of this fantasy.

Moving together, Megan pushed her chair back while Sophie crawled forward and out from under the table.

Now Megan would take control. With one hand she sought a nipple while the other descended between Sophie’s legs. Insistent, she penetrated deeply and held still. The effect was powerful and immediate. Sophie’s belly began to purr and hum with animalistic delight. She pressed her legs wide apart, careful to keep her pussy visible to both their client and their audience. In reward, Megan cranked hard on Sophie’s left nipple, sparking a pinching jolt of painful pleasure.

She heard herself make a wanton gasping sound. A moment later, Megan was pushing her backward to lie flat on the table. Megan positioned her, adjusting her knees so that she lay spread eagle, baring herself to Megan’s tongue.

For more than two minutes, Megan pretended to eat her pussy. She kept her mouth on Sophie’s right labia, away from her clit—a good show for everyone watching, but manageable on the stimulation front. Still, Sophie was heaving and quivering by the time Megan stopped playing around and moved on once more.

Megan made her sit up. Jay came nearer to watch while Megan returned to finger-fucking Sophie. Sophie’s job through this part was to pinch her own nipples and give her clit an occasional rub. She did so, albeit cautiously. All the while, she kept her eye on Jay, who seemed completely transfixed by the show.

He began to shed clothing. He ditched his suit coat, tie and shoes, watching Megan carry on to the next step.

This part gave Sophie qualms. At the client’s request, they would not use recreational low-temp wax. They would use special candles formulated to melt at a higher temperature. The wax would not burn anyone, but the hotter temps would provide strong, lasting stimulation.

Megan moved relentlessly forward. She reached up to remove a red taper from the candelabrum. The candle had burned a quarter of the way down, leaving eight inches of scarlet wax.

Making eye contact, Megan raised her brows, asking permission to proceed. Sophie didn’t allow herself to lose her nerve. She nodded an assent.