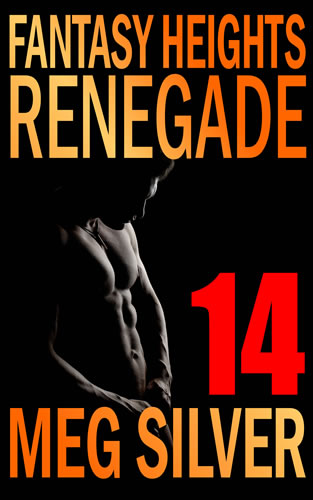 Amanda had never felt bad for nails before, but she flinched as Josh kicked off a fresh, thunderous round of hammering. Hell-bent on finishing a new Fantasy Heights venue, he’d been working on sheetrock for ten hours now.

Today marked day two of his construction frenzy. Yesterday Josh had worked from five in the morning until ten at night. There seemed no end to his frustrated energy. Ever since they had found out about the photos of Sophie’s mother and Wade Fraser’s daughter placed at that rave site, Josh had withdrawn from everything except work while guilt for the unwitting part he’d played in resurrecting Janos took chunk after chunk out of his hide.

She supposed if he had to punish himself, he could find worse ways. At least he was safe here on the resort. Two armed guards waited outside the building under strict orders to keep out of Josh’s sight while he worked.

His haste made sense, too. The new voyeur-slash-exhibitionism venue already had bookings. Built to resemble a Victorian-style home, the six-bedroom house featured secret passageways and viewing ports. Last week, one of his crews had hung the windows and finished the exterior walls. Inside, the subflooring had been laid. Most of the ground-floor sheetrock had already gone up. Josh had very nearly completed the entire second floor himself.

Amanda, left at loose ends for the day, had delivered lunch several hours ago, and stayed to help. She fetched tools and measured sheetrock, knowing Josh did not want her around. Their chemistry didn’t care whether Josh felt ready to have a physical relationship again. The longer she stayed, the higher the tension climbed, causing long, breathless stares and lingering, shivery touches.

For at least the fifth time that afternoon, Josh said, “You should go.”

Josh gave her one of those sidelong looks. He might as well have called her a stubborn old bat. She raised an eyebrow back at him, as if to say Look who’s talking.

Out loud, he said, “You’re wasting your time. I don’t need a babysitter. And I don’t want to talk about anything.”

If he hadn’t sounded so obstinate, she might not have acted so rashly. She pretended to give him some space by heading into the bedroom on the opposite side of the wall where he worked.

The hammering commenced, this time with less furor. Knowing he could also see her through the observation window, she brushed plaster dust off her coral-colored work-shirt and khaki shorts. A deep vein of devious pleasure opened up as she turned to face the observation window while undoing her top button. The shirt had eight of them, and she had reached the fourth one before the hammering stopped.

She watched herself go on unbuttoning on the mirrored side of the window, certain Josh was watching. Finishing the row of buttons, she shrugged out of the shirt.

Finally, Josh appeared in the doorway. “What the hell do you think you’re doing?”

“Undressing. It’s been a while since we test-drove one of your creations.”

Josh’s mouth opened and closed while he crafted and discarded several arguments.

So hot. He looked amazing, even covered in plaster dust. He’d dropped weight in the last few months, losing some of his bulk, but still he made her blood roar with feverish hunger. As she shed the rest of her clothing, leaving her nude before him, she could see that she had lost none of her hold on him, either. His erection pressed against his jeans. His pulse throbbed in his neck. He hesitated there, awkward, like he couldn’t figure out what to do with his hands.

Finally he said, “This isn’t gonna happen. It can’t.”

“God dammit, Amanda. Don’t force my hand. You don’t have any idea what the consequences will be.”

Over-prepared for these same old arguments, she said, “Neither do you. None of us do.”

“Exactly. This isn’t fair to Thomas. I see how he is with you, Amanda. What he’s like. How happy he is. I would never do anything to diminish that.”

“But you are diminishing it. He misses you. You’re his best friend, and you ignore him like he doesn’t even exist. You think that doesn’t hurt him or his relationship with me?”

Josh squeezed his eyes shut and swiped his hand over his hair, sending up a puff of white dust.

“And what about me?” she pressed. “I love you. I love you as a friend, as a partner, as a huge part of my life I can’t live without. I dream about you. I worry about you all the time, and you just… won’t… budge!”

“Why would I? I’m the only one thinking about the future. I don’t understand how the two of you think this could ever work. Someone will always feel left out, and when it ends, we’ll all be wrecked.”

“You don’t know that. And okay, yeah, none of us knows what could happen. It’s not like there’s a rulebook out there telling me how to love two men at once. In fact, most of the modern world pummels me with rules about how I can only love one of you. But I do love you both. Do you doubt that?”

“Do what? Make you feel something? Make you stop blaming yourself for everything Kay did long enough to let me love you?”

“Or maybe it’s just a good start. I know you want me, but I don’t have any illusions. I know one time together won’t bring you back to us for good. Still, I’ll take what I can get.”

His jaw set in a telltale stubborn, clenched line that she both loved and hated. “It’s not…” He paused to sigh, tangling his words the way he did when he was upset. “You should be worrying about Sophie and Wade. I’m really worried about Sophie.”

“And there you go,” Amanda said. “Trying to distract me and push my attention onto someone else. You told me once that everything would be okay as long as I didn’t hide anything from you or Thomas. And all you ever do anymore is hide. You’re miserable, enforcing your stubborn rules on all of us. And it’s completely unnecessary.”

Fearing she may have pushed too hard, she moved toward him to soften her words with the comfort she needed to give him.

He watched her, wary, until she was close enough to take his hands. The grit of plaster dust and the roughness of his skin itself made her hands tingle with remembered, hopeful delight. “Please, Josh. Can’t you let yourself take this one little step?”

“I can’t.” He almost crushed her hopes until he added, “I’ve been working all day and I’m filthy. Plaster dust is bad news on bare skin.”

Amanda wanted to let out a whoop of triumph. She had him. Now all she had to do was keep him on track. “Luckily enough, there’s a mostly-finished bathroom about twenty feet behind me.”