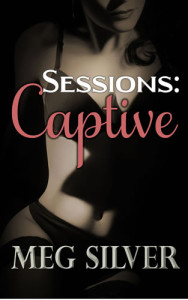 Novella 1: A tentative Harper learns that surrender has its benefits as she ventures into an intimate bargain with sexy, commanding Matt Solomon.

This had seemed like such a great idea during the planning stages.

Now that the moment was upon her, Harper Isley wondered what sort of reckless, wanton person would enter into such an arrangement?

She stared at the heavy wooden door before her. All she had to do was let herself inside this apartment, undress and become Matt Solomon’s sexual captive for the night.

They had negotiated this surrender. Months of back-and-forth emails and phone calls had yielded a long list of rules, preferences and boundaries. She and Matt had presented each other with clean bills of health. The success of this agreement now hinged on Matt’s ability to take command, and whether she had the mettle to let him.

She had her doubts. She even felt fear, picturing all the things that could go wrong.

She hadn’t felt afraid while leaving home half an hour ago. In fact, she’d looked forward to this first encounter for weeks. The stress of work had her tied in knots lately. This release could only do her good.

Besides. She knew Matt Solomon well enough to trust him with her body. Hearts and minds didn’t factor into this sexual pact. Neither she nor Matt had the time or attention required for an emotional affair. This agreement gave her nothing to fear, and she hadn’t become the highest paid project manager in a Fortune 500 company by buckling at the first sign of difficulty.

Still, the act of unlocking the door of Matt’s pied-á-terre seemed to require an outlandish amount of courage. She had never done anything like this before. Her sex life thus far had neither set the world on fire nor bored her to sleep, but the notion of giving up all control went against her nature. According to her older siblings, the first complete sentence she ever spoke was “Don’t tell me what to do.”

In her own defense, her brothers and sisters did run toward the micro-manager side, but Harper hadn’t changed in any fundamental way. Which, she reminded herself, was exactly why this experiment mattered. Perhaps allowing someone else to make the decisions for a while would teach her something.

Raising her hand, she rested Matt’s key against the lock. She committed herself by pushing in and unlocking the door. The tumbler inside the warehouse-district loft turned smoothly, letting her into a narrow foyer with wheat-colored walls.

As promised, to her left waited a side-table with a black and gold-speckled granite dish on top. The key, when she dropped it into the dish, slid to the bottom with a musical note of metal against stone.

The key played a central role in this agreement. If Harper left her key in the dish when she left tonight, Matt would know she didn’t intend to return the following Thursday.

If, on the other hand, she took Matt’s key home with her, he would know to plan for another session next week.

Harper stared at the dish, wondering how she’d feel after this first session. Would she walk out without the key? Or would she snatch it up, satisfied and looking forward to next week’s session?

Only one way to find out.

Her anxiety climbed as her attention shifted to the simple slat-backed chair waiting next to the side-table. Matt had laid down strict rules about certain things. One rule forbade Harper to leave this foyer while clothed. She could never step foot beyond the hallway threshold wearing anything other than jewelry. Her purse and clothing were to remain on the chair throughout the session.

Knowing this step would require some courage, Harper had kept things simple, wearing only enough to keep her decent. Her floral jersey wrap dress came off quickly and easily. She had skipped panties and stockings entirely. No waif, a bra could not be skipped, and she left the black satin 36C number resting atop her neatly folded dress.

Matt had asked her to wear her long, dark hair atop her head in a bun so it wouldn’t get in his way. Patting her head to make sure the knot remained intact, she stepped out of her kitten heels and nudged them under the chair.

Completely nude now, she felt a slight chill. Her nipples clenched tight, though the temperature had nothing to do with it. Undressing had aroused her to the point of gooseflesh and a glowing, warm ache between her legs.

Turned on already. See? she told herself. You need this. You deserve this, and Matt will enjoy himself just as much.