We have, at last, come to the end of the cats whose name starts with B. 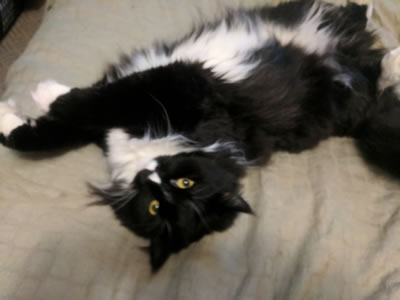 He, like his littermate Bear, will turn two in November. Another camera-shy turkey. He got his name because that white bit on his nose and lip were the very first thing I saw when he was born which—if you look really closely—matches the Meg Silver triangle-and-circle-intertwined icon.

The birthdate is the only thing he shares with Bear. This guy is a cupcake. A high-maintenance one, due to being a walking UTI. He enjoys every second of his special treatment, and likes being fed his UT-care kibs BY HAND. Yes, I am completely, 100% guilty of indulging his behavior cuz I just swoon when he comes to me for his noms. Everyone behold this monster I have created.

Otherwise, he is Booger’s shadow. Also a budding lap cat who likes hard petting and claw-hands down his back.

2 Replies to “But Wait There’s More”