Continuing on with the Silver cats theme, here’s another one. 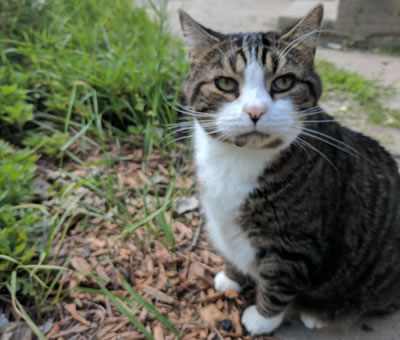 Yes, you read that correctly. The cat’s name is actually Booger. He and his sister (who will be coming up soon) are both eight years old. They’re littermates rescued from my mother- & father-in-law’s woodpile. Both cats had distemper when Mr. Silver brought them home. Believe me when I say the name “Booger” was well earned by the time I’d nursed these wooly mammoths through their illness.

These two cats are ENORMOUS. They both ballooned after they were spayed/neutered. Booger, though, is just plain loooooong. Here I’m trying to show the scale of this guy: 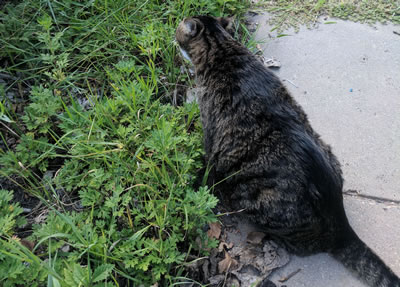 Right now he’s 24 lbs. When he sits on you—which he will insist upon whether you’re willing or ready or not—you know you’ve been sat on.

He’s actually slimmed down a lot with some dietary changes and exercise. When I say exercise, I mean “forcing him to go outside, which he despises, and will only roll in the dirt and race immediately back into the house the moment some traitorous human opens the door”. I had to bring one of said traitorous humans outside with us to get these photos. This cat will NOT look at the camera if he’s inside. So imagine us chasing after this turkey as he waddled from one door to the next trying to find a way back inside. Thank God for Mr. Silver’s tragically neglected wild-patch—AKA Booger’s salad bar—or I would never have scored a pic of the little turd’s face. 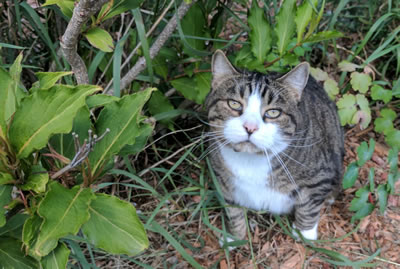 With all that said, anyone who has ever visited our house agrees: this is the sweetest animal ever born. He loves everyone. He purrs like a misfiring 350 small-block engine. When he’s in your lap, he’ll reach up to boop your face if you’re not looking at him. Beware, though, of his mouth-kissing and eyebrow-biting habits. He’s a tom cat, you know? Lazy, adorable and a total Dom when it comes to giving affection.

In every other way he is an absolute dunderhead. Whom I love just a little.

2 Replies to “Yes, You Did Mention Cats”